The Secret History of the Whippets, a NYC girl group 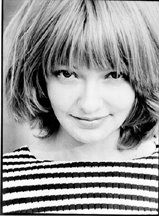 A few nights ago--the anniversary of John Lennon's death, actually--my friend Sean Carrillo sent me a link to a deliciously goofy MP3. It was a novelty single his wife Bibbe Hansen recorded with two girlfriends in 1964 as The Whippets, "Let's Go Go Go With Ringo." This primitive girl group 45 would be a hoot in its own right, but it becomes all the neater when you reflect that Bibbe Whippet was the littlest Warhol superstar, daughter of happenings artist Al Hansen and later mother of Beck, while Janet Whippet (link includes audio) was the only child of Jack Kerouac. Charlotte Rosenthal, meanwhile, had interesting taste in friends.

So before posting a link to "Let's Go Go Go With Ringo" so you, too, can get this thing stuck like goo in your noggin, I had to ask, how did three New York City girls end up faking British accents in an aural love note to the schnozziest Beatle?

Bibbe replied with the inside scoop:

"Charlotte Rosenthal, Janet Kerouac and I were all downtown street kids in 1964 New York City. While panhandling, we three met songwriter Neil Levinson ("Oh, Denise") and hustled busfare from him. On the bus ride we fell to chatting. The Beatles had just come out big in the US and Neil had written a girl-song response to “I Want To Hold Your Hand.” Would we be interested in hearing it? We met him later that day at Steinway Studios on 57th Street and together finished the lyrics and music for “I Want To Talk With You.” It was a classic girl group riff and we dug it. That same day we went to a half dozen record companies auditioning the song without any takers. As a last resort, Neil called Colpix label’s Don Rubin from a payphone. When Don said he would see us we ran all the way over to the audition. We sang the song and within the next couple days we were signed to Colpix and to DuLev Productions. DuLev was Levinson’s company with his partner, Steve Duboff. For the B-side Neil brought in pal Jean Murray (Jean Kauffman) who had co-written the Darin hit “Splish Splash” with Darin and her son, DJ Murray the K. Oh, that she only wrote us another “Splish Splash!” Instead it was the rather silly and insipid “Go Go Go With Ringo.” We loved the A-side but weren’t too wild about the Ringo song. Over the next few weeks we rehearsed daily, shopped for matching outfits and had 8x10 glossy promo pictures taken. At one point we were introduced to the group The Tokens who apparently were now 1/3 owners of our act along with Dulev (1/3) and Jean Murray (1/3). Our percentage was apparently not accounted for under this bookkeeping arrangement. Similarly, I have no idea how Don Rubin and Colpix were supposed to get their cut.

Within a few weeks we were recording. The record was pressed—at least dj copies. We got a box of these records to split between us. I believe it was released however briefly but nothing much happened with it. I heard our masters were sold to Laurie Records at one point. Later I heard we’d charted somewhere in Canada. Shortly before she died, Janet Kerouac told me her Rhino Records lawyers were looking into that and had found that we were owed a little bit of money. Apparently not enough to bother collecting from what I can tell.

I ran into Steve Duboff once around ten years ago in LA. We talked on the phone. He’d been living in Hancock Park and was just then packing to move out to the beach. He thought he had some copies of the record somewhere and said he would look for it as he would love to give me a copy. We lost touch and I never saw him again. I heard only last week, he’d died of cancer in LA, February 2004. Janet Kerouac came to visit Sean and I in California a couple times in the early 1990’s. It was great fun to reconnect. I haven’t seen Charlotte Rosenthal since 1965."

Never heard of her! Great article, just saw her son, Beck, perform on SNL and got curious about his life.
Thanks for filling in pieces as to why he has such great talent, and perseverance.