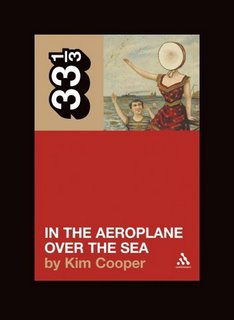 The Aeroplane Flies High
The devout, ever-multiplying cult of Neutral Milk Hotel should perhaps prepare for a second coming. By Rob Harvilla

The most influential indie-rock record of the past decade reverently declares I love you Jesus Christ, features the songs "Two-Headed Boy" (parts one and two) and "The King of Carrot Flowers" (part one, then parts two and three combined), uses semen as a lyrical motif, crushes heavily on Anne Frank, lists a zanzithophone player in its liner notes, and whips up an unholy racket like several punk rockers and a Bulgarian wedding band trapped in an elevator together, desperately screaming for help. Stranger things will never happen.

Fortunately, Neutral Milk Hotel's In the Aeroplane Over the Sea, a carefully guarded secret upon its release in 1998, has been happening ever since. The record's vibrant, chaotic Salvation Army Marching Band sound and surrealist wordplay has inspired current big-shots from the Decemberists to the Arcade Fire to Clap Your Hands Say Yeah. Mysterious NMH mastermind Jeff Mangum -- who all but disappeared shortly after Aeroplane's release -- became a full-fledged reclusive genius deity, a beloved Salinger for the Pitchfork set. Pitchfork itself, meanwhile, recently deep-sixed the tepid Aeroplane review the online rock-crit site had originally run and replaced it with a fawning, triumphant 10.0 coronation.

Seven years later, the record's influence and capacity to fascinate have swelled to gargantuan proportions. Now, Los Angeles-based writer and critic Kim Cooper -- a devout lover of bubblegum pop and so-called "unpopular culture" via her zine Scram -- has taken the first real crack at unraveling Aeroplane's mystique, penning a tome for Continuum Books' immensely popular 331/3 series. Each selection is a pocket-sized hundred-or-so-pager devoted to the genesis, construction, and aftermath of one record, and although the series has enjoyed success with paeans to classics like the Smiths' Meat Is Murder and Prince's Sign 'O' the Times, Cooper's Aeroplane volume might be its biggest hit yet.

The record's ongoing critical revisionism has helped, of course, but Kim insists that word of mouth has slowly turned Neutral Milk Hotel from near-unknown to near-mythic. "I think it's just based on how many people love it," she explains. "People get very evangelical about this album. A record review can't do that. Who really cares if the record's got a 10.0, compared to sitting down with a friend who plays a song for you and it blows your mind?"

Kim's book is a fairly straightforward rise-and-fall narrative, beginning with a gang of Louisiana college radio rats who migrate on a whim to Athens, Georgia, while slowly coalescing into the Elephant 6 collective, a loose-knit crew of psychedelic-pop artistes who've found success with bands like Olivia Tremor Control and Of Montreal, but undoubtedly peaked with Neutral Milk Hotel. In-depth interviews with friends and collaborators -- including pop aficionado Robert Schneider, who produced Aeroplane at Pet Sounds, his Denver studio -- fill it out, but the famously distant Mangum transcends and haunts it all. He doesn't talk to Kim on the record -- "He didn't immediately say no, and ultimately he didn't say yes," she explains -- but you get just enough of a sense of the guy, from his affinity for rehearsing in the bathroom to his night terrors to his apparent obsession with Anne Frank's harrowing WWII artifact, The Diary of a Young Girl.

And I know they buried her body with others

Her sister and mother and five hundred families

And will she remember me fifty years later

The Jeff/Anne love affair is a strange and sometimes uncomfortable pairing. "Picture the Franks in their Dutch hidey-hole, 1944," Cooper writes. "Picture the Elephant 6 gang fifty years later, rock 'n' roll and road trips and DIY. Incongruous worlds, but the sets collide, and somehow fit perfectly together." Maybe not perfectly -- though plenty of critics hate E6 and Neutral Milk in particular, it's doubtful they've ever seriously considered genocide.

Over the phone, Kim explains it a bit more convincingly. "I think it was a personal connection with her as a writer and as a person, this really lovely adolescent who was just kind of flowering and becoming an adult and an intellectual, and it was all just wiped away by forces so much more powerful than her," she explains. "Some people think that he was in love with her."

Does she think so? "I think he loved her the way that you love anyone whose story really touches you. You want the best for them, and you can't help them, and that's where you get I wish I could save her in some sort of time machine."

At first it's off-putting that Kim largely avoids probing the meaning or backstory behind Aeroplane's beguiling lyrics -- she tacked on a track-by-track analysis at her editor's request -- but ultimately it makes sense to leave all that to your own inclination and imagination. Mangum's seclusion is also a fuzzy affair, but though his refusal to record, perform, or submit to interviews shortly after the album's release was partly due to private, personal issues, Kim's book heavily implies that much of it was showbiz, borne of Mangum's desire to go out with a bang, slowly work his devotees into a deifying lather, and then descend from the mountain years later with a spectacular follow-up. Urban legend insists he's gone completely bonkers, but the facts suggest he knows exactly what he's doing -- in her text, Kim makes the point of noting that Mangum is alive, lucid, and sane.

"If you listen to the music, it's obvious that there's a lot of thought that goes into everything," Cooper says. "It's not very random. ... There's a certain elegance to just walking away and leaving this kind of resounding note in the air."

And lo, just as Kim's book comes out, new Neutral Milk Hotel demos surface online, capping a year that also saw Mangum show up onstage with old E6 buddies such as the Circulatory System and Olivia Tremor Control. The Aeroplane revival has reached critical mass, and the Great Comeback may in fact be upon us.

"That's certainly what [paramour and, coincidentally, zanzithophonist] Laura Carter thought he was doing," Kim concludes. "That he was echoing artists from the past he liked who disappear for periods, and then come back when nobody's expecting something, and really blowing people's minds. I hope he does." Whether you know it or not, so do you.